Air barriers are designed to prevent the flow of air, and the moisture attached to it, from entering a building envelope. A vapor barrier only aims to prevent the transport of moisture by vapor diffusion into a home’s building envelope. Notably, the amount of moisture carried by airflow is 50 to 100 times greater than that carried by vapor diffusion, which makes the need of a high-quality air barrier, like Barricade® Building Wrap, more essential than a vapor barrier.

Furthermore, impermeable vapor barriers may cause a build-up of mold and rot, while permeable air barriers, like Barricade® Building Wrap, ensure evaporation of moisture within a home’s wall system.

What is an Air Barrier?

The 2018 International Energy Conservation Code (IECC®) defines an air barrier as one or more materials joined in a continuous manner to restrict or prevent the passage of air through the building thermal envelope and its assemblies. An air barrier material must also have air permeance that is not greater than 0.02 L/(s·m²) at a pressure difference of 75 Pa (0.004 cfm/ft2 at a pressure difference of 1.56 lb/ft2) when tested in accordance with ASTM E 2178. Air permeance is the quantity of air that permeates through a product, while air leakage is the air that passes through gaps and holes.

What is the Purpose of an Air Barrier?

The purpose of an effective air barrier is to regulate the indoor climate by stopping the transfer of air, and the moisture associated with, between the interior and exterior of a home. An air barrier must also resist air pressure differences that act on them. Stopping air transporting moisture to the interior of a wall assembly is critical because when the warm vapor touches the cool interior walls, the vapor turns to liquid by condensation. Essentially, air barriers minimize or restrict heat loss and gains through conduction, convection, and radiation.

The Basic Requirements of a High-Quality and Effective Air Barrier

The 2018 IBC, section C402.5.1, air barrier criteria for commercial buildings (required for all climate zones but 2B) require a continuous air barrier throughout the building thermal envelope. Furthermore, the air barriers shall be permitted to be located on the inside or outside of the building envelope, situated within the assemblies composing the envelope, or any combination thereof. In addition, the air barrier shall comply with Sections  C402.5.1.1 and C492.5.1.2.

The study concluded that the presence of a vapor barrier did not produce significant changes in the moisture content of the wall assembly. Furthermore, of the four mechanisms for moisture transfer into the wall system, liquid flow, capillary suction, air movement, and vapor diffusion, vapor diffusion represented the smallest amount and so is less likely to cause severe damage to a home.

Eliminate the Need of a Vapor Barrier with Barricade Building Wrap 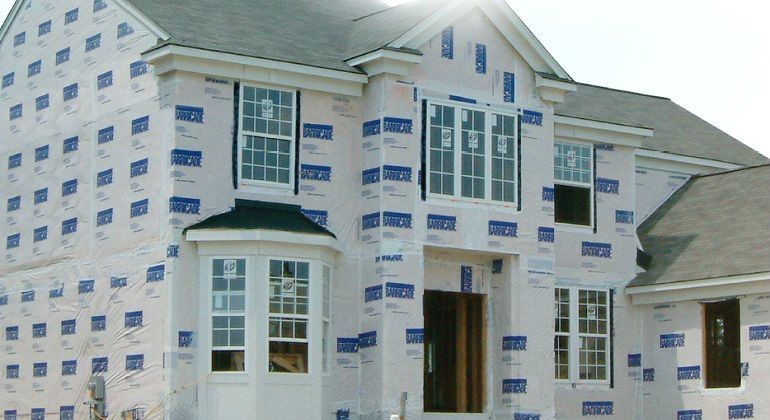 Barricade Building Wrap is a continuous air barrier over the entire home’s building envelope. Barricade Wrap is also impermeable to airflow, durable over the expected lifetime of the home, and has the stiffness and strength to resist the forces that act on it during and after construction.

Barricade Wrap is an effective air barrier that is continuous, permeable, durable, and strong. Unlike impermeable vapor barriers, the Barricade Wrap can resist moisture while allowing humidity to escape from exterior wall cavities, which is of particular importance in hot and humid climates. Please visit Barricade® for more information on air barriers vs. vapor barrier.